Jenn Harrington is a mover and a shaker in the Somerville arts and music scene. While she doesn’t produce records or make art, she’s widely regarded in many circles as a “connector” – she has an innate ability to recognize common ground and interest amongst people and bring them together to bridge the gap of unfamiliarity. You’ll find her behind the scenes and behind the camera – producing, documenting and promoting what she recognizes as gems of the art and cultural scenes of Somerville and Cambridge.

Spiral Bound focuses on storytelling. Typically, interviews are conducted and features are produced with no remnants of the original questions or answers in structured formats. Jenn’s story will be different. Below are the original questions asked and Jenn’s typed responses. I contemplated reworking the answers, but why mess with something when it’s already perfect the way it is?

When and why did you move to Somerville?

Living in Rhode Island, I took a break in college and worked second shift, alone, in a nursing home’s laundry for eight months. After sweating with everything that can leak out of other human bodies for eight hours, it was impossible to sleep so I’d lay on the couch and flip channels. One night I ran into a video show on a local Boston channel playing Madder Rose’s “Panic On.” While I have a massive imagination for the future of others, it’s difficult to be forward-thinking for my own benefit. Watching that video was one of the few times I knew where I would be one day. And though I moved to Maine and then back to Rhode Island for awhile, every day I was aware that I would end up in Boston.

I’ve lived in the same apartment in Somerville for 13 years now. It’s actually my second stint in this town. The first was a short-lived because I was living near Broadway—an isolating experience. I moved to Harvard Avenue in Allston for a couple of years becoming familiar with puddles of vomit on my doorstep and breakups wailing under my bedroom window, and then moved back to Somerville because it was affordable, accessible, low key—it felt like home. I’ve only been able to stay because the landlord has been very good to me.

What activities and events have you been involved with in Somerville and elsewhere?

I have passion for the written word, music, and the visual arts and gravitate my energies towards them. I’ve curated a number of group exhibits in Somerville including I’ve Been Everywhere, Man: Musicians on the Road, Winter (dedicated to Dave Lamb of Brown Bird), Get In My Shoes, PICNIC, The BIG BAD, and The Beast in Me—Johnny Cash: Art Influenced by the Struggle of a Man. I also organized Tom Waits, Johnny Cash, and Frank Black tribute nights in Somerville and beyond for various community benefits. Even though I’m incredibly shy and internal, I enjoy taking the lead in projects that gather people of various backgrounds and locations together for enlightened (and entertaining) purpose.

I’m currently assisting Audrey Ryan with her long-standing DIY music event series at The Loft—booking bands, taking donations for musicians, picking out rad snacks, and cleaning up. We just hosted our first show of the season with Bent Shapes, The Furniture, Roz and the Rice Cakes (Providence), and Audrey Ryan. It was a ton of fun. In November, we’re hosting The Dazies, P. Everett (Brooklyn), Slowdim, and Audrey Ryan; and in December, we’re hosting our annual holiday craft fair.

The Loft is one of the best rooms for the essence of music in the Boston-area: it’s amazing to see the audience so receptive to the musicians. We’ve been honored to host incredibly talented (and nice) bands, most recently out-of-towners (listen to them, pretty please) Diane Cluck, And The Kids, Death Vessel, O’Death, Run On Sentence, Ravi Shavi, Footings, Jonah Tolchin, and too many talents to list from this area. I can not do Audrey Ryan enough justice for keeping this series going for so long: she is proof that it is not just the room or the bands…there needs to be someone in the center making the magic happen…and she’s been doing it for years.

What’s you favorite part of the arts and music culture in Somerville/Cambridge/Boston?

I’m really interested in people who have equal measure of taste, class, and hard work. I have enormous respect for Audrey, bookers Randi Ellen Millman of Atwood’s Tavern  and Jason Trefts of Illegally Blind and Fuzzstival; Steve Legare of Kitchen Sessions; anyone involved in Fringe Union, Gallery Kayafas, the Flash Forward Festival; the organizers of Starlabfest and Porchfest; I’m growing quite fond of Cuisine En Locale (who will be hosting Last Good Tooth and She Keeps Bees on 11/5); and I pretty much go bananas for the book recommendations of the Harvard Bookstore and Brookline Booksmith staff. Others worthy of mentioning: anyone who runs a local culture blog; the bookers of P.A.’s Lounge past: Tony Confalone of the much missed band Tony the Bookie; Jen Guthrie of Band in Boston (an incredible local music archive); and John and Tommy Allen of Fedavees and Drug Rug; as well as Andrea Gillis and Michelle Paulhus of The Dents who booked my favorite times at the Abbey Lounge. And walking by Lesley University’s new Lunder Arts Center puts an extra hop in everyone’s step. I could go on, I should on, but I’m getting tuckered by all the brilliance.

But to completely honest, I have a lot of mixed feelings about the culture of this area. Somerville doesn’t have a bookstore. The Nave Gallery—-which is the only building in Davis Square that the public can hang out in (besides the library) without buying something—struggles every day. Venues and independents are closing their doors in quick succession. It’s increasingly more unaffordable for residents and businesses alike. We’re all feeling the squeeze and we’re not working together to demand attention to the matter—this is not just an artist issue, it is everyone’s issue.

When you aren’t working, what are you working on or doing?

I love to witness people evolve who are already at their A-game. I love seeing underdogs succeed. I love those who find success and try to boost up others who are good at their craft who haven’t yet found recognition. I love when people aren’t afraid to show their depth. I love teachers…you don’t have to stand in a classroom to be one. I love when people volunteer their time for good causes. There is an incredible amount of talented people in this world and the best of them are those that are thoughtful about the world immediately around them. 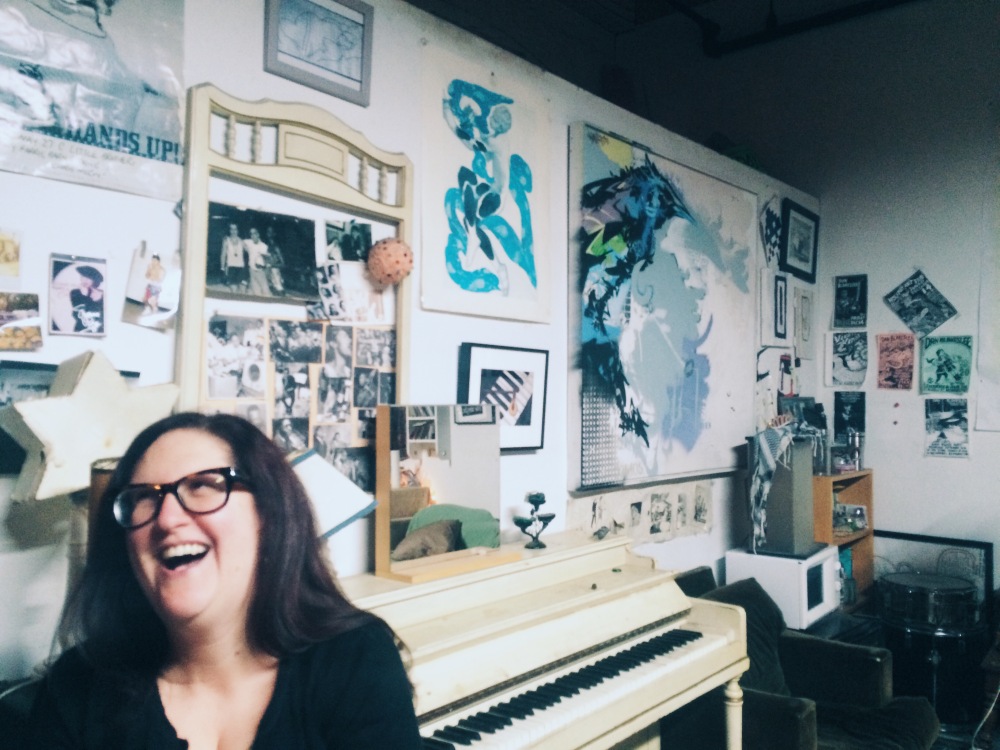 I have an immense appreciation and respect for the people that run the Columbus Theatre in Providence. It is a gorgeous and beautiful-sounding space; the booking’s tremendous; and it has a spirit that’s unique to most venues: it genuinely thrives on a love for music…you can feel it from every person on staff and the audience, too. I do not drive and even though the commute can be a challenge, I have seen some of my favorite bands there: Brown Bird, Joe Fletcher & the Wrong Reasons, Sharon Van Etten, Michael Hurley, Last Good Tooth, Cass McCombs, Tallahassee, Death Vessel, Iron & Wine, Ravi Shavi, Arc Iris, Vudu Sister, Charles Bradley, Wanda Jackson,  Haunt the House, Roz Raskin and the Rice Cakes, O’Death, Toy Soldiers…

What roles do music and art play in your daily life? 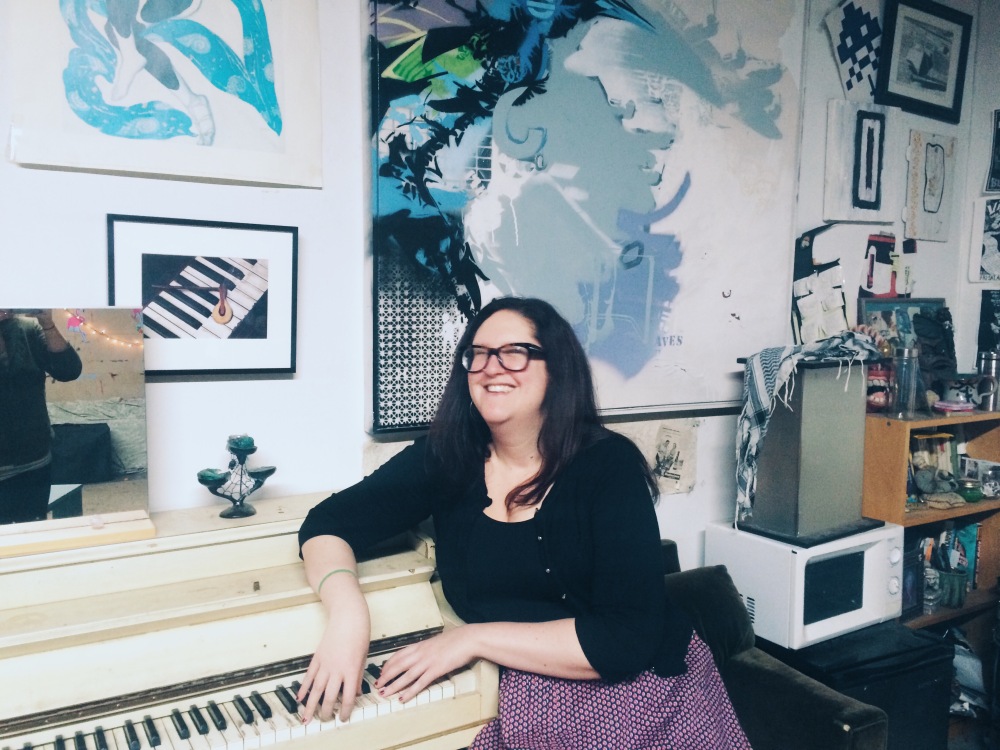 One of your main purposes seems to be encouraging musicians and artists to complete their craft. Why is this important to you?

Being a terribly idealistic person can get me in trouble (try it: ouch). But I refuse to drop the idea that we can actually have an exceptional world. The arts is one of the very few ways that we have to understand our struggles and our pleasures—to experience wonder. It’s maddening to see it undervalued.

I was proud to work on some grant projects for a couple of artists this fall. It took me aback when a few friends asked me, “what do you get out of it?” The answer seemed obvious: it is fulfilling to assist. I don’t have a ton of money…I can’t be a patron via massive financial means. But I can do what I can: dedicating time and hard work, putting in a kind word, making an musician or artist or writer know that they are noticed and appreciated (in a thoughtful way). I honestly feel at the end of our days, it is not awards won or salaries earned, it is seeing how we helped those around us to succeed that’s the ultimate of joys.

When I was a kid I loved how Melanie Griffin’s character in Working Girl saved newspaper clippings and connected the dots to create a new idea. Sometimes people are so good at their dot that they forget to connect. I’ll tell you: the four-eyed awkward too tall shy lady standing in the back corner who is terrible at small talk is superior at finding ways to unify.