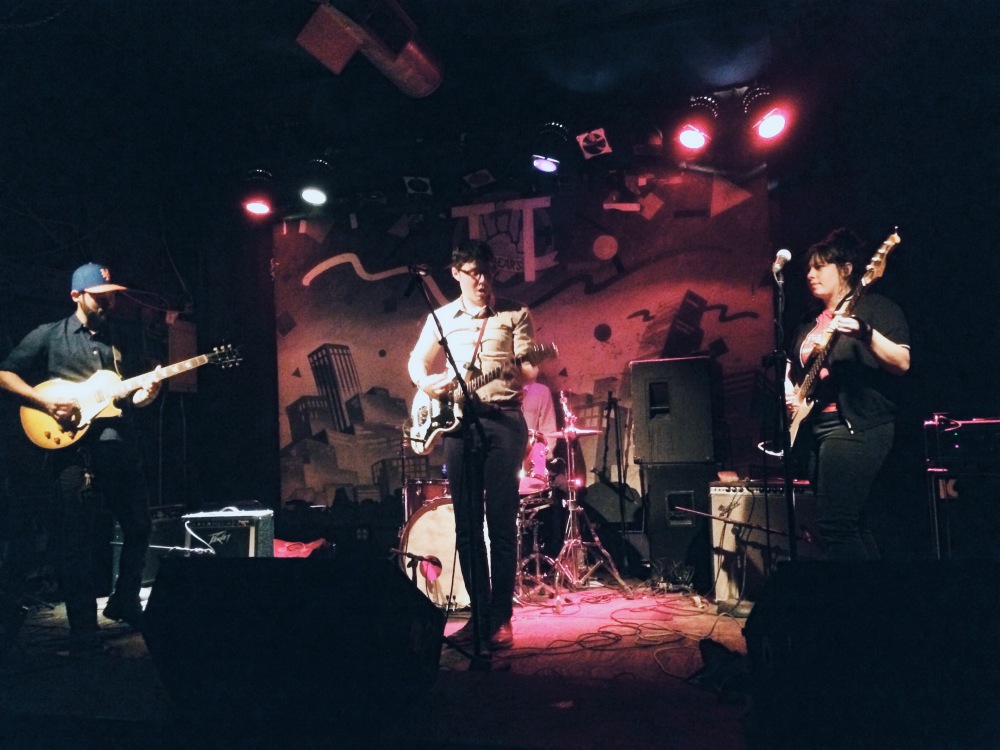 It’s the middle of winter and Ben Potrykus, Andrew Sadoway and Elio DeLuca are running in between Medford’s the Soul Shop and Sadoway’s car in the snow. Light from the Shop’s open front door leaks out as the four turn on Sadoway’s Honda Fit, place a CD in the player and listen. When the song dies out, the three head back into the Shop and close the door.

This scene will repeat every couple of hours for a handful of days.

“We had a process for mixing,” said Potrykus. “We listened to it on the monitors, like great sounding monitors, and then listened to it on Elio’s little speakers which he calls ‘the truth’. Then we’d listen to it off the tape machine through this tiny speaker. Then we’d listen to it through headphones. If everything inside sounded good, we’d take it to Andy’s car and listen to it in the car stereo. That’s when we’d be like ‘Okay’ and sign off on it.  Andy and I have the same car – it’s a Honda Fit – it’s pretty standard … you know, Honda sound system. We did this so we would be able to gauge how it would sound to people when they were listening in their cars.”

We had a process for mixing

Potrykus and Sadoway, alongside Luke Brandfon and Jenny Mudarri, are members of the band Bent Shapes. The group recorded and mixed a record at the Soul Shop this past winter with DeLuca (Titus Andronicus, Wilder Maker, Bellwire), the Shop’s engineer and co-owner. The album, set for release next year, is representative of a band soaked in talent, versed in the power of hard work and appreciative of the people, places and things that have brought them to where they stand as a group today.

Bent Shapes began under the name “Girlfriends“. Potrykus and Sadoway first met in high school, but didn’t start playing together until 2009 when Sadoway moved back to Boston after being away from the city for a period.

“I was like, ‘Oh I remember Ben from back in the day, let me see what he’s up to,'” said Sadoway.

The two, alongside third member Supriya Gunda, formed a band called “Girlfriends” in 2009. The trio released a couple 7 inches and an online single over the course of the next three years. Then, at the tail end of 2012, the group changed their name to Bent Shapes.

“I will generate really long lists of band names in the hope that even one of the poor choices will spawn something else or we can take one of the words or the sounds or something and come up with something else,” said Potrykus.

“I think Bent Shapes is one of the only things you put forward and I was like, ‘Oh I like that,'” said Sadoway. “I don’t think we even talked about what it meant – I think part of the reason that we choose it was because it didn’t really mean anything.”

Growing up, Potrykus and Sadoway were very much surrounded by music. Sadoway has been playing the drums for 19 years. Potrykus started guitar and singing in his early teens. Both grew up with records in the house and with musical family members. Potrykus even had a brief stint as the frontman for the indie rock band The Receiving End of Sirens.

With a combined total of over 30 years of musical experience under their belts, Bent Shapes hit the studio to record their first full-length record called “Feels Weird” on a label out of San Francisco called Father / Daughter Records. They recorded the album over the course of 18 months in Arlington at a studio called Mystic Steamship Co. The process was long and transformative.

“They (Mystic Steamship Co) were kind of going through a growth spurt with their studio at the time and we were also in transition,” said Sadoway. “We had just changed our band name, we were integrating new people into the band, so it was kind of this parallel growing in a lot of ways. We learned a lot about recording from that record, but it also took a really long time. It took us over a year to record it, mix it and everything.”

“Feels Weird’ was released in August 2013. The band promoted the record, played around town and began writing and prepping for their next record – all with a rotating cast of characters.

The current roundup – with Brandfon (Mini Dresses) on guitar and Mudarri (Feral Jenny) on bass and backing vocals was solidified in the fall of 2014. 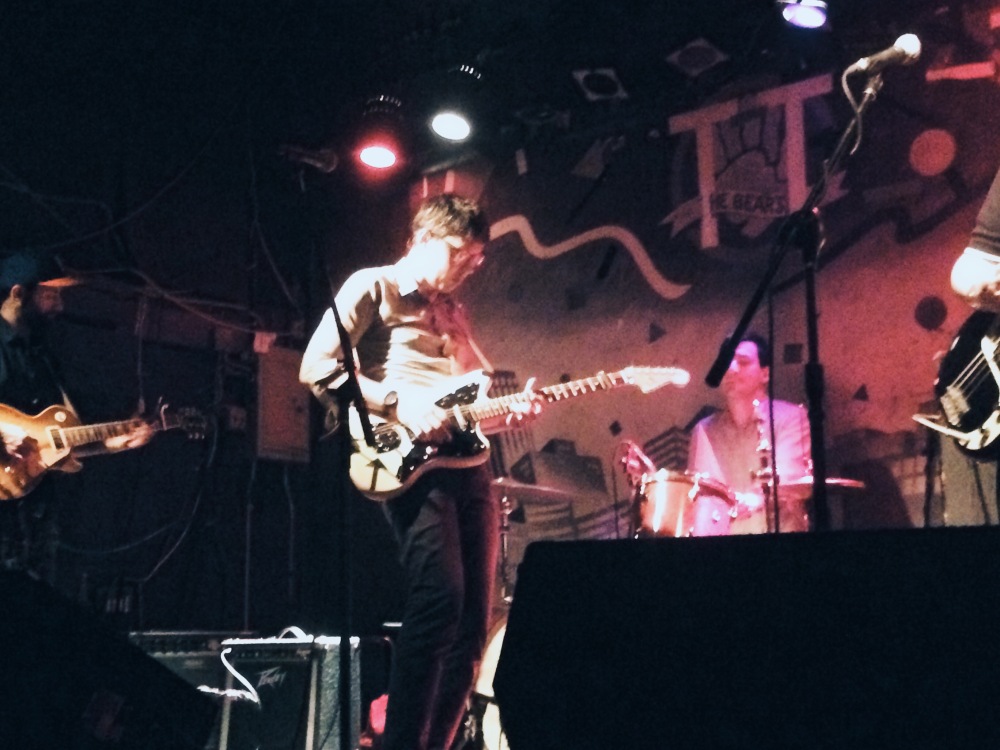 When the time came to record a second record, Sadoway and Potrykus knew they wanted to do it differently. Both had heard about an analog studio in Medford called The Soul Shop and decided to book tracking time at the beginning of 2015.

“We didn’t have a ton of money going into it,” said Sadoway. “Because we had spent so much time on the first record, we kind of didn’t want to do that again. We wanted to just get in there and get down to business and crank it out in a couple of days.”

The band took five days to record 10 tracks – including vocals, overdubbing and the inclusion of stringed instruments and horns – and four full weekends to mix all the tracks. 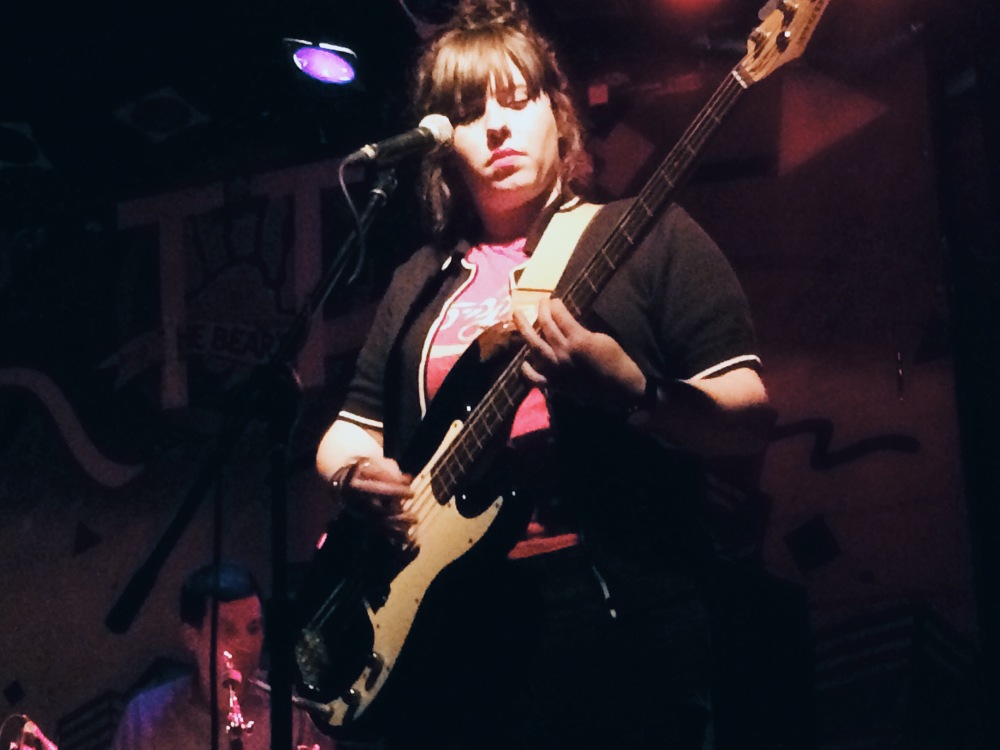 For the band, recording at the Shop with DeLuca helped set the vibe and feel for the tracks.

“I think just sort of immediately when we got there, we were made to feel very comfortable,” said Potrykus. “The control room sort of becomes your living room. We tried to stick to not having phones be super accessible at least during basic tracking. But you know, we were camped out there in a blizzard so it was nice that it was cozy so that you didn’t feel like you were getting cabin fever. Elio has one of those Chemex coffee makers so there was some really good coffee to be had. Medford’s a kind of doughnut mecca – which we didn’t realize at the time so there were a lot of pros to the space and the area that extends to the general feel about the Shop. I don’t want to quote the Olive Garden ‘When you’re here, you’re family’ type of thing, but you’ll be in the control room and like Patrick will stop by or somebody will stop by and talk about an amp for a second and it gives everyone a breather. Everybody meets everybody and it’s cool. You get the opportunity to show somebody else your stuff and that was really fun for us.”

I don’t want to quote the Olive Garden ‘When you’re here, you’re family’ type of thing, but you’ll be in the control room and like Patrick will stop by or somebody will stop by and talk about an amp for a second and it gives everyone a breather. Everybody meets everybody and it’s cool.

The band came in with basic tracks and worked with DeLuca to flush them out, including having him arrange string and horn sections for some of the songs. DeLuca is a classically trained pianist and a lifelong musician. He’s arranged strings for a number of records, most notably on the Titus Andronicus record The Monitor.

Aside from DeLuca’s contributions in the studio, Potrykus usually starts the song-writing process on his own.

“ I usually will play guitar until I come up with a riff,” said Potrykus. “I have to force myself to play guitar because I don’t particularly like sitting down and just playing guitar. So I’ll just sit down and play until I have something that sounds catchy to me and is interesting and then I’ll go into notebooks that I keep to just write down things that I think could be expanded upon – just like song themes or lyrics. I’ll pull something together as far as like the basic structure – usually it just starts out with a verse and I’ll alternate those a couple of times, get the lyrics down.”

From there, Potrykus brings what he has to the rest of the group for input and work shopping.

“I’m not sure what it is, maybe getting older and being around the scene longer, but I’ve found that songs and music benefit more when they’re looked at in a group setting,” said Potrykus. “So I’ll bring them in and we’ll go over them as a group and fine tune and what not.”

For Potrykus and Sadoway, creating music in the studio is great, but it’s being able to play songs in front of an audience that’s their favorite part.

“I love playing live,” said Sadoway, who also has a side project called Andrew Saturday. “That’s why I continue to make music, is being able to play live.”

You can check out Bent Shapes live in Boston on Oct. 13 at O’Briens and in New York on Oct. 11 at the Cake Shop.